For a long time I’ve had a hypothesis that a person’s tea or coffee order had some kind of unintended deeper meaning, a sort of predictor of the drinker’s personality. Earlier this week, my wife Tracy and I had a chance to meet up with a trio of friends at the Teazer World Tea Market in downtown Fresno. Since it was the Memorial Day holiday, it turned out to be an unusually quiet afternoon at the normally bustling Galleria center, on Capitol between N and O streets. It was the perfect opportunity to not only enjoy some good company but also to get back into the swing of observation and test my theory.

Our friend Marcus wasn’t quite sure what to order, overwhelmed a bit with Teazer’s impressive tea selection. With input from Tracy and the bartender, he picked an elephant chai, which is a vanilla chai drink lightly spiced with cardamom, cinnamon, and cloves. Marcus, who is a graduate nursing student at Fresno State, was kind and gregarious enough to share a sip of his drink for anyone at the table who wanted one. Someone said that Marcus’s drink was the best at Teazer.

Tracy ordered her usual: the razmatazz, a black tea drink with raspberry, key lime, and lemongrass. I also ordered my usual: the limey, a black tea drink with lots of key limes. Tracy and I do love to try new local places to eat out all the time, but we also tend to stick to our comfort orders when we return to those places. I think I’ve ordered the limey every single time I’ve been to Teazer, in fact, even though they offer more than 200 teas. 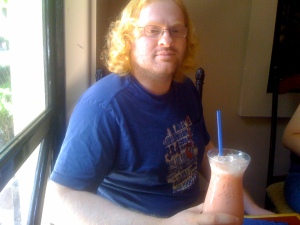 Our friend Reaz told the bartender that he wanted a drink that was more like a dessert. The result: the monk’s blend, a black tea drink infused with vanilla and grenadine. Reaz, who teaches journalism at Fresno State and is also a classical music composer and short-story writer, powered down his drink efficiently, a clear nod of approval to our hosts at Teazer in his first ever visit.

Our friend Susan ordered a tangerine dream, a drink known for its tang and vigor. Susan, who teaches journalism at Fresno State while also knitting, spinning, and researching social media, perhaps summed up the day best with her response to my question of how she picked her drink. “I wanted something cool and refreshing on a hot summer’s day.” While her thought initially reminded me of an old Nestea Plunge commercial, I later realized that my afternoon of observations made a lot of sense.