I’ve always kind of wanted a brother, someone to talk to about dude stuff. I already have a little sister who is a schoolteacher in Las Vegas. But she and I don’t talk much. So when Eric Parker came along a few years ago, I got my wish. Not only does the guy wash windows (above), write a great blog (here), and regularly rub elbows with literary greats (here and here) but he has also has been just about the best brother I could have asked for.

Eric grew up in Clovis, lived in San Diego, and got both his BA in English and his MFA in creative writing here at Fresno State. He currently lives in San Diego where he blogs and is working on a book project. Ever since I met him in 2004, Eric and I have talked about doing some daytime tours of the little towns that surround Fresno. Even though both of us have lived in the central San Joaquin Valley off and on for most of our lives, there are so many people and places right under our noses here that we want to check out and immerse ourselves in–a la Gay Talese or Susan Orlean, two of our favorite writers–just to see what we find. 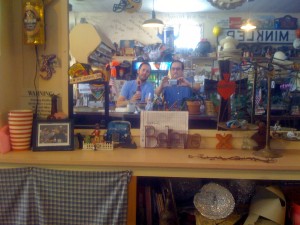 Eric was in town this past week or so doing research for his book. We had a couple chances to get together for meals and to catch up. This past Tuesday afternoon, Eric and I went on a quickie tour of spots in Minkler, Reedley, Dinuba, Kingsburg, and Selma. Our first stop was the Minkler Cash Store on Highway 180 northeast of Sanger. We bellied up to the bar and visited with the owner, Mary, whose mother Sylvia knows my dad from his days as a truck driver at the former Central Valley Ready-Mix, and a local, Jeffrey, who was playing the piano when we got there. Mary said she remembered me from when I was a kid. We had a great visit with them and loved the organized clutter of the store.

Next stop was Uncle Harry’s restaurant on G Street in Reedley. This is not the Uncle Harry’s that most people know as a bagel shop. This is the Uncle Harry’s of Harry Horasanian, a longtime restaurateur and a friend of my mother’s family for generations. His Armenian food is well known by folks all over the valley and even my vegetarian brother Eric went animal style with the turkey kabob sandwich during our visit. He said when you’re going local, you’ve got to do what the locals do. I’m pretty sure he didn’t regret it.

We motored into Dinuba to visit my parents next. Eric snapped this shot of me and my mom before we left. But mostly, Eric and I hung out in the garage with my dad, playing billiards and ping pong. The results? Well, my dad did a lot of shit talking and beat everyone in billiards. But no one could touch me in ping pong. Eric held his own in both and he even shared a can of Olympia with my dad. I’ve never been a beer drinker and I think my dad has sometimes wished I was. But two out of three dudes (67%) kicking back an Oly on a hot summer day worked better for us than one out of two (50%). 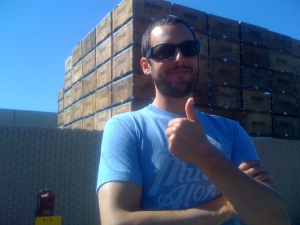 We rounded out the tour with a stop at the Sun Maid raisin plant just outside of Kingsburg and a quick drive down Golden State Boulevard through Selma, past the famous Wilkins Drive-In, on our way back. The Sun Maid plant was a little disappointing because only the gift shop is now open to the public. No tours inside like back in the old days. But at least there were free samples, good conversation, and a few photo opps for two brothers who made time to take their own little tour of a couple places that had always been there.

3 thoughts on “An afternoon with my brother”