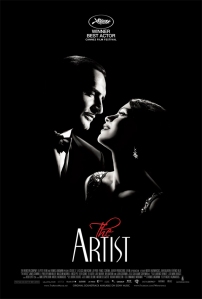 “The Artist”
Directed by: Michel Hazanavicius
Format: Big screen
Viewed: Sunday 1/29/2012 with my wife at the Sierra Vista in Clovis

It’s rare for me to walk out of a movie theater feeling truly inspired by a film. But after seeing this year’s Golden Globe winner for best picture, “The Artist,” I felt like a million bucks.

“The Artist” is a gorgeously shot silent film that contrasts the declining days of an accomplished silent film star with the rise of a young actress at the dawn of the talkies. Actor Jean Dujardin plays the lead with such magnetism and grace that it’s easy to see why critics call him the French George Clooney. Argentine actress Bérénice Bejo absolutely glows as the character Peppy Miller, the film’s delightful heroine. The duo of Dujardin and Bejo cast a charming spell over the entire film. Director Michel Hazanavicius cast Dujardin as his star in the OSS 117 spy movie spoofs, and he is married to Bejo. That closeness to his principle actors and his incredible attention to cinematic detail yields a magical movie.

My wife may have summed up “The Artist” best. She said that she liked the film because it felt so real. She doesn’t know a lot about silent movies, but the ones she has seen have always been so upbeat and over-the-top happy. We just don’t know about silent movies that had underlying themes of loss, depression, and suicide. That’s what makes this movie so great, she said. It’s true to the glory of the silent film era, but it also feels modern and truly authentic.