Intersection for the Arts interns install the 100 Days, 100 Portraits prints alongside the work of artist Joan Osato in late October for the Califas Festival, which runs Nov. 1-17 in San Francisco. (Photo by Rebecca Ahrens)

This past spring and early summer, I gave myself a photography assignment: Make 100 portraits in 100 days. After falling off the personal creativity wagon around the first of the year, while I immersed myself instead in teaching at Fresno City College and volunteering for Fresno Filmworks, I felt like I needed the challenge.

My friend and colleague Jes Therkelsen, a talented photographer and documentary filmmaker who came to the Central Valley this past January to teach digital media at Fresno State, inspired the assignment. In his intro to photojournalism class, he asked his students to make 100 portraits of strangers over the course of the semester. At the end of the term, their best photos were featured in a show at Arte Américas downtown. Jes’s students used his prompt to help them break out of their shells socially and get tuned-in to their visual literacy skills. I decided to modify the prompt a bit to allow myself to make photos of whomever I’d like — some strangers, and some people I knew — but I added the photo-a-day regimen to build self-discipline. 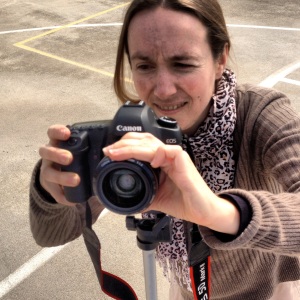 My portrait of AP journalist Gosia Wozniacka kicked off the series. (Photo by me)

I posted my first portrait on Feb. 24, a photograph of my friend and colleague Gosia Wozniacka from the Associated Press, while she worked on a documentary shoot with her new DSLR. (I served as her production assistant that day.) I decided to make all of my photographs using my iPhone 4S, to emphasize intimacy and mobility. I first published the photos on Instagram, using minimal filters and corrections, to emphasize immediacy. I also shared the photos with family and friends on Facebook and Twitter, and I collected the full project as I went along on Tumblr, where I also occasionally post to my ongoing Drugstore with Dad series. Occasionally, I worked ahead a few days, but I promised myself that I would not fall behind (and miraculously, I didn’t!). Most people, when I explained the project and asked if I could make their portrait, said yes without hesitation. Only a couple folks, most notably Jes, my sister, and my veterinarian, declined. I posted my last portrait on June 2, a selfie that I fittingly made while driving home past the rural intersection of Jefferson Avenue and Golden State Boulevard, north of Selma.

I had a vague idea that I might like to try and get the project into a local gallery for an Art Hop show at some future time, but I wasn’t sure how I would prepare and present 100 individual photographs. So I let the portraits sit there on my Tumblr for a few months, as I returned to making artsy fartsy, heavily filtered snapshots of my dog, my wife, and random still lifes from my day.

Yes, THAT Nikiko Masumoto, of Masumoto Family Farm fame. Nikiko calls herself an “agrarian artist and farm apprentice,” and her family is one of the most high-profile farm families in the Central Valley. I’ve been lucky to know her father, David Mas Masumoto, through his books over the years and through my time in the MFA program at Fresno State. I’ve also been lucky to eat the Masumoto family’s delicious organic peaches and nectarines. And in spring 2012, I was beyond lucky to produce a public radio feature story on Nikiko’s inaugural Valley Storytellers Project performance, two collaboratively written plays about hunger facilitated by Nikiko that included the voices of nearly two dozen community actors.

Nikiko invited me to present my 100 Days, 100 Portraits project as part of her second Valley Storytellers Project performance, a Central Valley Art-guided Bus Tour that took place on Oct. 19. The tour started at the Fowler branch of the Fresno County Public Library, where I helped kick off the day by projecting my portraits on the wall of the community room and reading the names of the participants aloud, like a poetic incantation. We then boarded the bus and made stops at the grassroots community garden in Pixley and at the Phillip S. Raine rest area along Highway 99 in Tipton. At each stop, the day’s six other artists — including Nikiko, my wife Tracy Stuntz, and my Chicana sister Teresa Flores — shared their creative offerings. You can see how the day unfolded live on Twitter by checking out the #ArtBusCenCal hashtag. 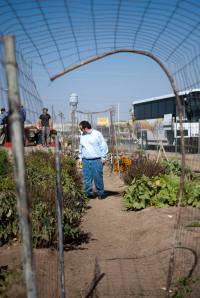 I take a walk through the rows of tomatoes, squash, and basil at the Pixley community garden during the art bus tour. (Photo by Andre Yang)

The art bus was made possible by the folks at The Triangle Lab, an experimental art organization based in San Francisco, as part of their two-part Califas Festival, which celebrates the people and stories of the Golden State. The Triangle Lab’s director, Rebecca Novick, contacted me shortly after the bus tour and commissioned my portrait project to be included in the second half of the Califas celebration, which runs from Nov. 1-17 at Intersection for the Arts at 5th and Mission in San Francisco. The show includes an original play called Alleluia, The Road by L.A.-based Chicano performance artist Luis Alfaro. I was completely bowled over! The Triangle Lab folks even offered to make prints of all 100 portraits for the show, and the prints will be returning home to me in Fresno after the show’s run ends later this month. The portraits were installed last week next to the work of accomplished Bay Area visual artist and youth activist Joan Osato.

I am beyond grateful to everyone who has given my 100 Days, 100 Portraits project such warm feedback, both while it was first being produced and now that it is enjoying its second life. I am particularly grateful to Nikiko and to Rebecca for giving the project its first two physical homes, in Fowler and San Francisco. Where will these faces appear next?