Posted on August 13, 2012 by jeffersonbeavers 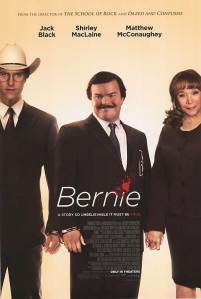 “Bernie”
Directed by: Richard Linklater
Format: Big screen
Viewed: Wednesday 8/08/2012 with my wife at the Regal Manchester Stadium 16 in Fresno

As a longtime fan of independent filmmaker Richard Linklater, I was beyond stoked to hear that his latest movie, “Bernie,” was scheduled for a Fresno Filmworks screening. I’ve been hooked on Linklater since I first saw his nonlinear indie classic “Slacker” back in the day.

Regular readers of this blog know all about my love and loyalty for Filmworks and the great job they do consistently bringing indie movies to a town that’s mostly devoid of indie movies. But I was disappointed when the movie’s distributors forced Filmworks to pull the screening just days before it was scheduled to play at the Tower Theatre, only to turn around a couple days later and try to restore the screening after they had already botched the deal with Filmworks in favor of a deal with Regal Cinemas. Luckily, despite the booking controversy, my wife and I had just enough time to catch “Bernie” at one of Regal’s multiplexes before it slipped out of town after a short one-week run.

Local theater politics aside, “Bernie” was a terrific film, and it showed Linklater in top directorial form. The movie, a dark comedy adapted from a real-life Texas Monthly magazine article by journalist Skip Hollandsworth, tells the story of a funeral director named Bernie Tiede and his unusual connection to a cranky, rich widow. Jack Black, who starred in Linklater’s blockbuster “School of Rock,” delivers a perfect performance as the protagonist, a guy that everybody in the small town of Carthage, TX adores to a fault. I’m not at all a big Jack Black fan, but it would be impossible to imagine anybody in the role of Bernie Tiede but him. He laughs, he cries, he dances, he prays, and most of all, Black delivers a flawless interpretation of Bernie’s remorse after shooting the widow (played wonderfully by Shirley MacLaine) in the back.

The movie also features a funny character performance by Matthew McConaughey, who got his first big break in Linklater’s “Dazed and Confused” in 1993. Oversized glasses and all, McConaughey plays the blustery district attorney who prosecutes Bernie. Despite the great acting of his three main actors, Linklater’s master stroke in this film is the onscreen presence of the local townspeople, many of whom star as themselves throughout the movie. Linklater films them talking about Bernie, the widow, and the D.A. in documentary-style interviews, lending a real feel of authenticity to the grand story played out by Black, MacLaine, and McConaughey. As the townspeople show up time and time again in unusual places throughout the movie, Linklater keeps you guessing about what’s real and what’s fiction, which is a delightful feeling for a movie whose characters are often asking the same questions.

Jefferson Beavers is a multimedia storyteller based in Fresno, Calif. He works at Fresno State and enjoys volunteering in the community.
View all posts by jeffersonbeavers →
This entry was posted in Movie reviews, Words. Bookmark the permalink.