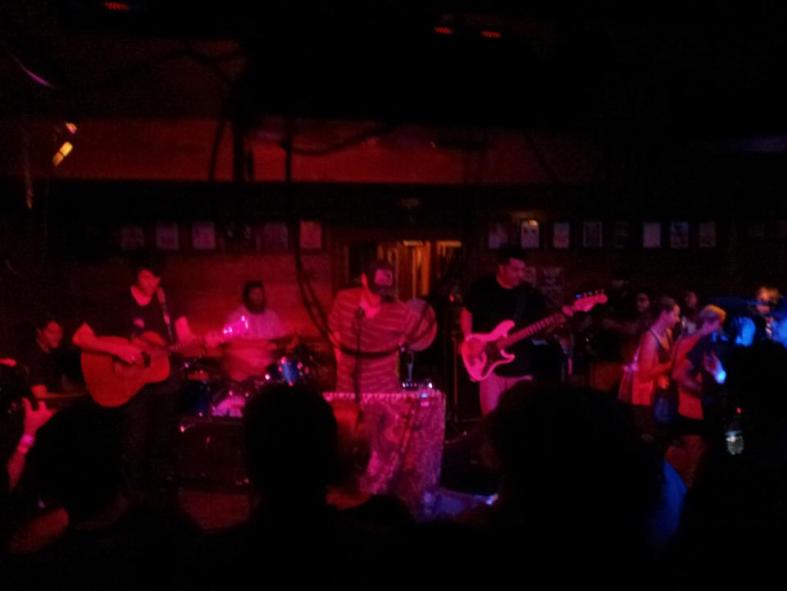 Under the red western lights of Merced, CA: Grandaddy at The Partisan Bar, 8/07/12. (Photo by Matt Orme)

When it comes to the legendary indie rock group Grandaddy, I’ve always found myself stuck somewhere between fawning journalist and fanboy collector. The Modesto boys definitely qualify as the band that has most changed my life. So, I was beyond excited when Grandaddy decided to reunite onstage this summer after a six-year hiatus. Thanks to shitty cell phone videos that keep on trickling in, the Internet has so far provided terrific lo-fi documentation of my favorite lo-fi band’s short 2012 tour.

My wife and I were lucky to catch Grandaddy at The Partisan Bar in Merced, CA on Aug. 7, at the start of their reunion. The show was billed as a performance by Arm of Roger, the screwball alter-egos of Grandaddy that put out one glorious LP in 2000 called “The Ham and its Lily.” The possibilities were tantalizing. Would the members of Grandaddy come out to play as Arm of Roger, and perform only foul-mouthed, nonsensical Arm of Roger originals like “Down With the Animals,” “One Time They Called and Asked for Freddy,” or “The Pussy Song”? Would they come out to play, in character, as Arm of Roger, but only perform fucked-up Grandaddy covers? Or would Grandaddy play as good ol’ Grandaddy after all, but maybe slip in a cover of an Arm of Roger classic like “Robot Escort” along the way?

More on all that in a minute.

First, allow me a trip down memory lane. I first discovered Grandaddy in the summer of 2000. Their sprawling second album, “The Sophtware Slump,” had just come out, and I was living in the band’s hometown of Modesto, CA. Hardly anybody I knew in Modesto seemed to care about Grandaddy, even though the boys were selling out shows all over Europe. But I immediately was hooked by the record’s melodic, dreamy first single, “The Crystal Lake.” I then spent hours and hours studying every word and every note of the full album, which felt to me then (and still feels to me now) like a consciously dazed, earnestly forlorn embrace of– and eulogy for– technology in modern life. For someone like me, who grew up in the same rich/poor central San Joaquin Valley that the band did, I could relate to it all.

My ticket stub from the 2000 Elliott Smith show at The Warfield in SF, where Grandaddy opened.

I then began my Grandaddy collecting binge, which includes all of their albums and EPs, nearly all of their singles and compilation appearances, and a random assortment of knickknack ephemera that includes stickers, patches, hats, T-shirts, posters, and even a bottle opener. I first saw them in 2000 at the Capitol Garage in Sacramento, where they covered 10cc and George Jones, and I picked up a rare copy of “The Windfall Varietal” after the show. I saw them later in 2000 at the Warfield in San Francisco opening for Elliott Smith, who died (way too soon) just a couple years later. And, I saw them on a scorching hot day in 2001 at the X Fest in downtown Modesto, where they covered the Pavement classic “Here” to my screeching delight. Later, in 2003, I reviewed Grandaddy’s third album, “Sumday,” for The Modesto Bee newspaper– my first ever published music review. (Regarding the album’s second single, “El Caminos in the West,” I wrote that the band had penned its “newest summertime jam” and that the song “promises to be a trademark Grandaddy singalong number.”)

In recent years, I saw Jim Fairchild perform in 2007 with his band All Smiles, opening for Menomena at the Cellar Door in Visalia. I saw Jason Lytle perform twice on his 2009 solo tour– first as the headliner at The Partisan in Merced, and a few days later as the opener for Neko Case at The Warfield in San Francisco. And in 2010, I got the chance to do a phone interview with Lytle and Aaron Espinoza on the eve of their show as supergroup Admiral Radley at the historic Star Palace in downtown Fresno. (I will never forget drummer Aaron Burtch pedaling his bicycle through the crowd that was gathered on the checkerboard dance floor, as local band Rademacher covered the Panty Lions classic “Herndon and 99” on stage behind him.)

I tell you all of that to tell you this: I believe that I am well-qualified to conclude that the Grandaddy reunion show in Merced on Aug. 7, 2012, was absolutely flawless. The set list was a fan’s dream– heavy on “The Sophtware Slump” and “Sumday,” but packed with early and obscure gems from throughout the band’s catalog. Arm of Roger didn’t show up after all, but nobody seemed to mind.

The first six songs went by in a blur: Every song was a singalong, and every song was a dance party. After the band played “A.M. 180,” Lytle quipped: “Pretty impressive, this karaoke business.” I can only imagine how surreal the karaoke business must have been to these five musicians– small-town guys who seldom got the time of day from hometown crowds in the days they were “popular,” but who were now surrounded by a hundred or so dedicated locals pressing in on them on the tiny stage at The Partisan, reciting every “doo-doo, doooo, duh-doo” that came out of their mouths. (The fit was so tight that I didn’t realize until seeing photos the day after the show that keyboardist Tim Dryden was actually onstage with the band; he was hunkered down in the far corner.)

Yes, it was THE show! (Photo by Tracy Stuntz)

Other highlights:
• In the middle of the set, the band thundered into the b-side “Chartsengrafs” but the song fell apart after the first part. They shrugged, laughed, and picked it up again right where it had fallen apart.
• They played rare track “Fare Thee Not Well Mutineer” for the first time live. Lytle confirmed the occasion, saying: “Take that to the bank and cash it for two dollars and twelve cents.”
• At the stroke of midnight, after playing for 90+ minutes, Lytle joked: “I think we’ve got one more left in us.” Then Grandaddy audaciously launched into the 9-minute deep cut “He’s Simple, He’s Dumb, He’s the Pilot.” Brilliant.
• The band covered Pavement’s “Here” as the encore, giving a shout-out to their college rock brethren formerly of Stockton, and featuring Kevin Garcia on backing vocals.

There was a moment late in the set, during the singalong to “Beautiful Ground,” when my good friend and Fresno musician James Brittain-Gore came up to me and gave me a hug, and we stood there together while the audience sang along with the band about their iconic robot, Jed. (“You said I’d wake up dead drunk, alone in the park. I called you a liar, but how right you were.”) For just an instant, I felt very old. I must admit, I had a bad thought: With all the indie rock karaoke and nostalgia in the air, I flashed forward to a vision of Grandaddy playing another reunion tour many, many years from now at the Stanislaus County Fair in Turlock. They were older, they were more grizzled, and they were still playing their sweet, sad little songs about the 2000 Man being adrift again.

I decided that I would like that feeling anyway.

One thought on “On the Grandaddy reunion and indie rock karaoke”